Blue-Fawn Frenchie’s contain the same double dilute recessive genes as are carried by the blue brindle or the blue pied, so that they take two fawn pigment genes, while the darker blues carry at least one copy of the brindle gene (which is dominant over the fawn gene).

The Blue-fawn Frenchie’s have a beautiful fawn tone as the base color with the most noticeable bluish masks and pads and blue tones on the back and ears. No two of them are exactly alike, but they are all fantastic, especially if you are partial to the fawn/tan’s coloring, which we are. 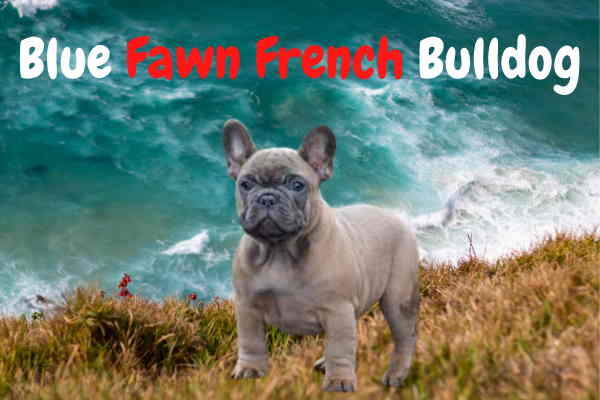 What is a Blue Fawn French Bulldog?

The Frenchie’s blue fawn has a cloudy-like pigmentation. They have a brindle gene that appears across their head, eyes, and on their backsides (also known as a tiger-stripe look). In these places, their blue color appears, too, rendering this Frenchie color attractive.

Frenchie’s second most prevalent form is the Fawn French bulldogs, the most common category representing the Brindle Gene. This kind of Frenchie is known among the breed for having one of the most stunning colors. This is a soothing color, varying from multiple shades that render this color one of the most difficult to discern. This is our second favorite Frenchie color!

Fawn coats have a wide variety of different tones that are still within their meaning, as we described. This is the sophistication of this coat form. However, there is a lot of mystery to view it, even though we love this one, which leaves a lot of space for color misinterpretation. Since the color spectrum is broad, it is possible to transfer lighter varieties of brown or even the so-called “Chocolate Frenchie” as darker varieties of Fawn, which may be bad for the breed’s protection.

The lighter eye color can be quickly differentiated from the standard fawn Frenchie with a black mask and, as I described earlier, the distinct mask color.

What is the price of Blue fawn French Bulldogs?

Blue fawn French Bulldogs costs range from breeder to breeder, but they will range between $4,000-$10,000 everywhere. Depending on the place and the bloodlines’ consistency, Lilac fawn Frenchie’s might go far beyond that, again.

How to Recognize a Fawn French Bulldog?

Light Fawn: This color is significantly softer than the color of the Cream French Bulldog’s coat, which can also be called pale tan or yellowish-white. Indeed, in color, it’s yellowish, and often it seems to be vanilla.

Caramel Fawn: It’s the point in the center. Slightly more in-depth than the Light Fawn above, it seems to be a light caramel shading.

Red Fawn: The darkest variant is this. It is a black fawn that tends in the most profound areas of the coat to be crimson. It’s close to the color of certain deer species.

Many of these shades are known as being within the spectrum of fawns. If you see a darker Frenchie, maybe it’s a Tan Frenchie, either a fad hue or a flawed Frenchie. If it’s lighter, it could be a Frenchie’s cream.

It’s interesting that French bulldogs only attract the attention of everyone like magnets. However, there is one glorious color in this dog breed that seems to be the most common. I’m talking about the Blue French Bulldog, whose fur color leaves people speechless.

We experience a lot of uncertainty if people speak about Frenchie’s color. As real lovers of French Bulldogs, we would inform you that the AKC and other colors approved by the Kennel Club were selected for a cause. In clubs worldwide, white, blue, cream, and fawn, and a distinct range of markings and designs, are accepted.

What is a blue fawn French bulldog?

This kind of blue French bulldog has a dusky-looking type of hair. The pieces of darker blues often bear a brindle gene in the blue fawn Frenchie’s, which are more noticeable on their face, around the muzzle, around the eyes, and on their tail.

The coat spectrum is broad, from very light gray to almost black, yet even in that situation, by looking at his nose’s color pattern, it can be seen that the dog is dd. In the unusual or rare color price category, the blue French Bulldog color is rare.

What colored eyes do French blue fawn bulldogs have?

Yeah, Frenchie’s eyes are color-changing. Their eyes would initially be blue when they are born. Their eyes would then continue to shift color to brown in around 10 weeks. The exception to the law is the Blue Fawn Frenchie, who may have blue or green eyes in maturity.

What does the term fawn mean for dogs?

Fawn is a tan shade that is light yellowish. It is commonly used for clothes, soft furnishings, and bedding, as well as for the color of a dog’s hair. It appears in different colors, varying from pale tan to dark deer-red to pale fawn. In English, the first recorded usage of a fawn as a color name was in 1789.